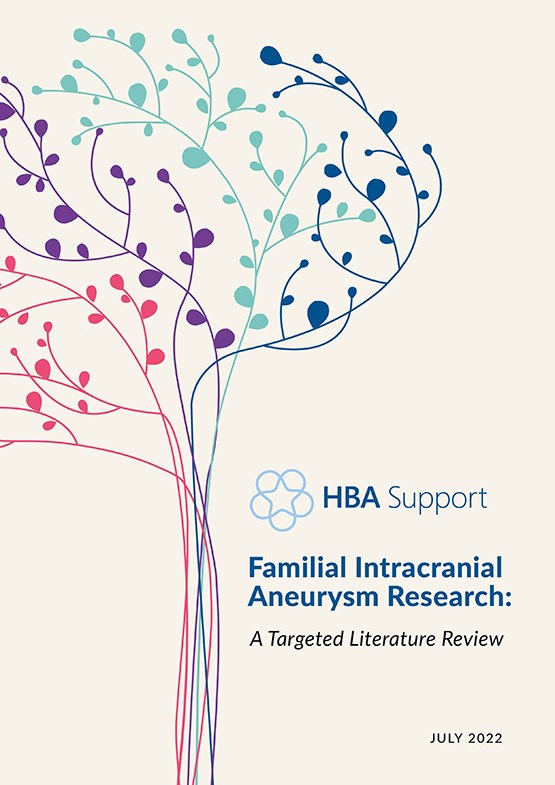 Brain aneurysms are a silent condition and can have a devastating impact on people’s lives. Currently, research suggests that if a person has a strong family history of brain aneurysms, they are potentially up to three times more likely to have the condition themselves.

However, until now, trying to understand the condition took hours of research. People affected by hereditary brain aneurysms often found themselves trying to piece together information from multiple sources, which was difficult to find, understand and navigate. What’s more, people’s experience of living with familial risk has played a limited role in research and has been often hard to find.

Commissioned by HBA Support and carried out on a pro bono basis by Costello Medical, an expert healthcare consultancy, the new report compiles literature on the rare disease in one, accessible, resource. The in-depth TLR looks at the reported pattern and distribution of familial intracranial aneurysms (FIAs), the genetic causes of FIAs and the current UK and global guidelines for its diagnosis, management and treatment.

Through conducting the TLR, existing gaps in knowledge were uncovered, signposting the medical community towards three key areas where more research is needed:

We know that more research, together with collaboration between clinicians and those affected by hereditary brain aneurysms, will improve the support available to those affected and their families.

Eventually, with increased knowledge, better genetic testing and targeted screening within high-risk families could be offered, saving lives and minimising the stress and worry which a diagnosis can cause.

Introducing HBA Support - what can you expect from us?
Rebecca's story

HBA Support is a voluntary and non-medical organisation. We take no responsibility for an individual’s health. For any concerns or worries, please always speak to your GP or a clinical professional.